Nikolay Morgunov: "I start feeling constrained by the flat surface of a canvas"

Q. You entered art school when you were a child and devoted all your life to painting. What is your career path?


A. From an early age I was fond of drawing which came to my parents’ attention who enrolled me in an art school. No one in my family ever insisted on me doing something else such as finding a “normal” job as is so often the case. An artist has two ways to progress his/her career, the first through commissions which I am categorically not able to do, the second by allowing paintings to be discovered by collectors who aspire to acquire them. The latter gives one more opportunities to focus on the development of a body of works.

The career path of an artist is comparable to a journey. When one finally reaches the top, one does not spend much time enjoying the view and starts the descent in search of a new project. For some time, one walks on a plateau only to find oneself beginning the gradual ascent to the top again. One never knows how long such a journey may take as on every voyage one’s aim is higher, and the backpack of experience larger. To this end one has to discard irrelevant things and take along essentials only in order to keep moving forward. This is the moment when one’s personal style is being formed. I am now 28, and am very interested in what is out there for me.


Q. Which masterpieces influenced you the most as an artist in terms of milestones in your career?


A. In early days, I used to find something in other works that would influence me almost on a daily basis. This was reminiscent to the history of Art, from cave (childish) drawings to classical school, from gradual breaking of forms to abstraction. The artists I tended to follow were also from those movements. Perhaps, I could highlight Francis Bacon and Mark Rothko. I admired their work for a long time, and at some point I realised their works were affecting my own, to the degree that some of their features became easily recognisable in my paintings while my personality was fading away.

It is a serious test for a young artist to become influenced by established artists while finding all the answers in one’s own work. If one is able to recognise this influence and resist it, one’s inner voice will break free and one starts developing one’s unique style.

Q. You live in Barcelona at the moment, could you say your style has changed since moving to another city?


A. My style has not changed, I would say it has become sharper. Sometimes I come back to my earlier works and find the same details I use in my new paintings. It amazes me how these same elements form completely different puzzles.

I started to look for a studio the moment I arrived in Barcelona. Everything turned out magically well for me, I found a studio to be shared with four other artists, mostly English. The owner of the studio Peter Wastell became a very good friend of mine despite the big age difference. It was the best time. We discussed future career plans and shared our opinions on things. One thing we had in common was that Peter had also left his country. Peter’s view was that the experience of living away from one’s homeland helps an artist to discover himself and he was absolutely right about that. There was another common point for Peter and me: both of us wanted to create our unique style and only then introduce it to the world. Peter was 65 years old at the time and he died exactly 1 year later, leaving hundreds of paintings in his studio. There is a Middle Eastern wise saying… I don’t remember it word for word, but the main idea is that even if you were looking for your dream your whole life and had not found it, you still will have lived your life with dignity. Until his last days, Peter was looking for his unique way of self expression, he did not exhibit his works publicly. I respect his position. However, I have chosen another path. In my view, one is missing valuable feedback and creating obstacles to improving one’s art when hiding paintings, not exhibiting them publicly and not giving them visibility.

Q. Spain is a very colourful country, bright colours are everywhere, while your works are black and white or monochrome, would you say you are in colour opposition with the surrounding environment?


A. My view of Barcelona is very different from what a tourist would usually have. I only see mountains, sea and blue sky from my window as I spend most of my time in my studio. Regarding colour, it is only temporary, I think it is not needed at the moment. The colour will come back if I feel the urge for it.

Q. Your paintings are three dimensional, they remind us about Italian artists who were one of the first to give volume to their paintings such as Turi Simeti, Agostino Bonalumi, Enrico Castellani. Do you use their works as a reference point?


A. I think, at some point in their career every artist feels limited by the frame of a painting, so he tries to resist it. However, as soon as you’ve created a volume, the surface starts dictating what can be painted on it. As a result you often consider leaving it in monochrome colour keeping the play of shades intact. All artists that you have referred to followed this approach. All decisions are dependent on the form otherwise it looks like the painting of a sculpture.

In contrast to those artists I am trying to drift away from the form as much as I can, I break it down with my drawings and try to avoid following the shape. It is a metaphor of life if we imagine the various shapes as different events we live through.

Q. Some artists aim to express their point of view on social changes such as Ilya & Emilia Kabakov, others tend to explore hidden emotions like Mark Rothko. In your view, what is the main role of your works?


A. I prefer art with a hidden message that aims at the subconscious. Each artwork is a reflection of the current time but if the message is on a surface it risks to become outdated very soon due to the context. The benefit of it is an instant feedback thanks to the direct message.

On another side, a figurative image absorbs all the attention, the viewer considers it through depicted objects. In my work I am going backwards, focusing on harmony through forms. It affects different emotions when compared to figurative painting. Art for me is a self-learning tool. It explores questions that are not easily answered. Such works are much harder to understand, the viewer has to make an effort to seize their meaning, just like with anything worthy of time and attention. An artwork that hides deep meaning and multiple concepts helps elevate our mediocre life, one feels there is something more to it and this mystery is captivating.In contrast, obvious meanings put us down. I would love the first type of work to take over the latter, and am doing my best to enable it. This is my main philosophy which is, perhaps, very utopian.

Q. Could you tell more about your technique? Your studio is based in the Eixample district of Barcelona. How did you manage to find this space and what is so special about Eixample?


A. I think structure is paramount for every painting. Everything else falls apart if there is no structure. I don't rely on a perfect combination of lines, brush strokes or composition, I don’t see it as effective. There are endless possibilities. That’s why I always start with drawings and working on the form in the first instance, and allow improvisation only after that is done. I am not afraid to make mistakes when painting, I consider beneficial any traces of struggle with the canvas. That's why coal as a medium suits me perfectly, every line stays on the canvas, nothing is lost.

It was pure luck I found the studio I am working at now. I could not believe I was able to rent this type of space. Everything worked out well and at the moment I live in a historical modernist part of Barcelona, in the house where the first lift of the city was created by Josep Maria Jujol. It has stained glass windows, bay windows and high ceilings. What can I say? I feel very lucky. 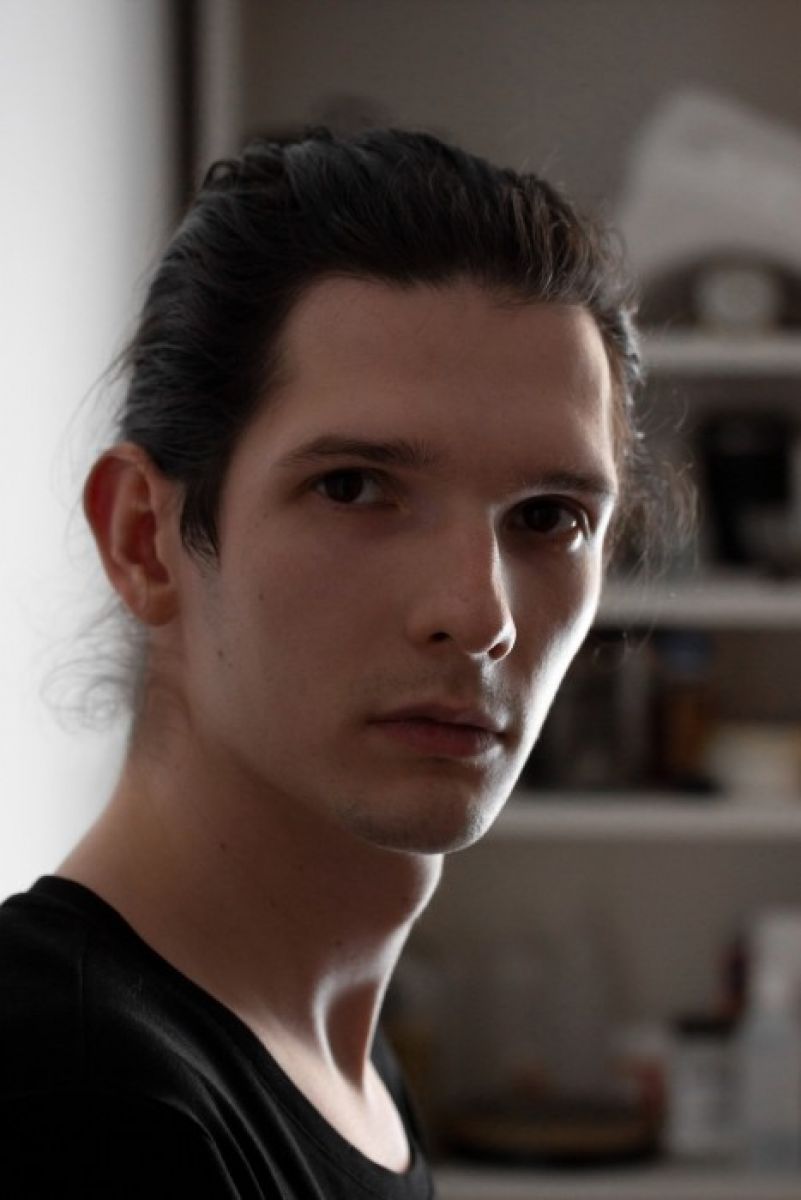 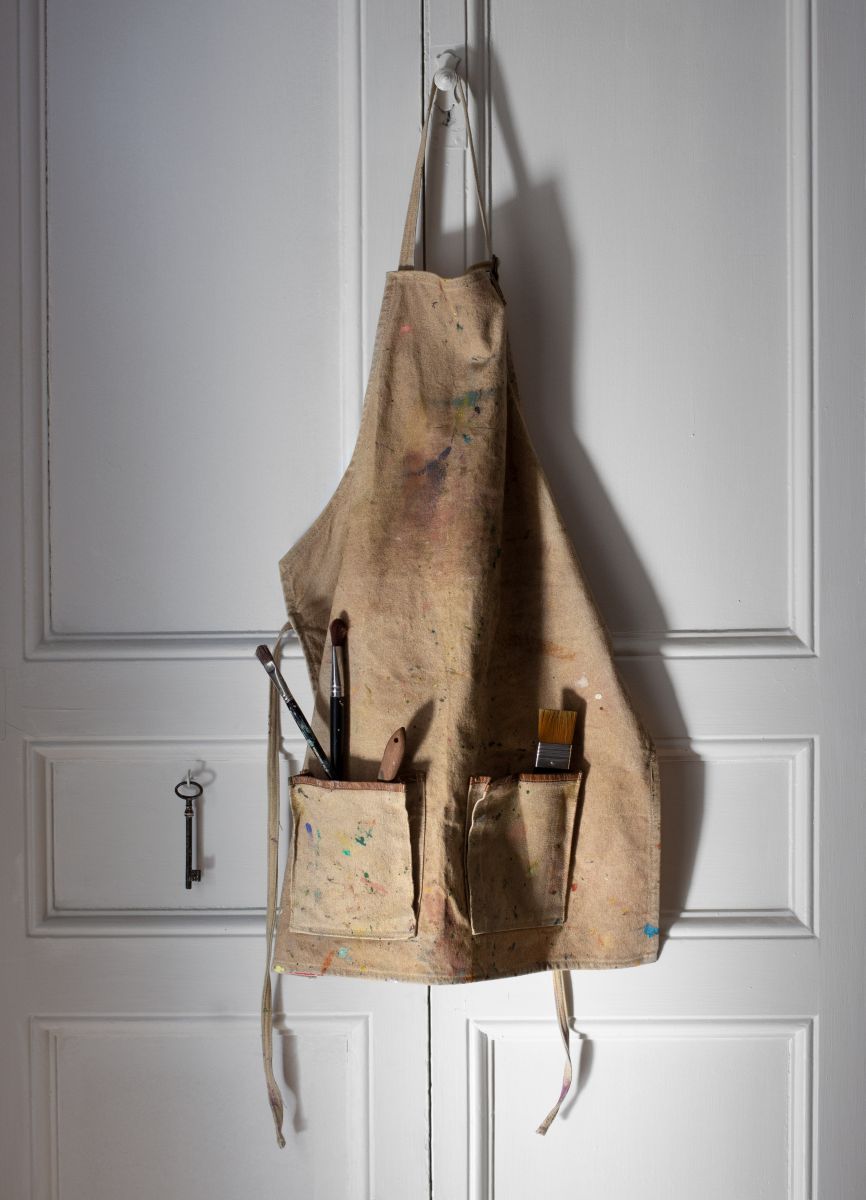 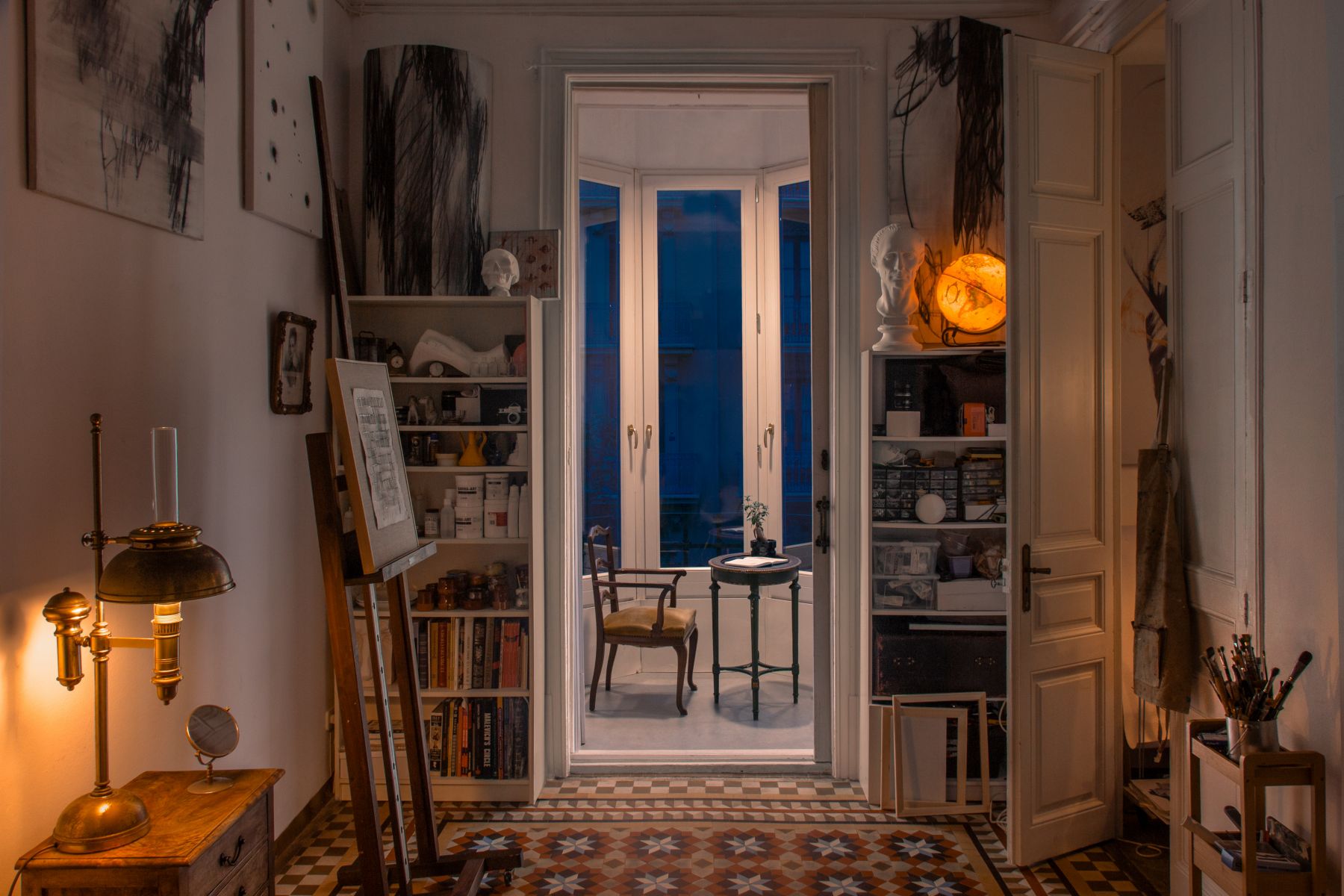 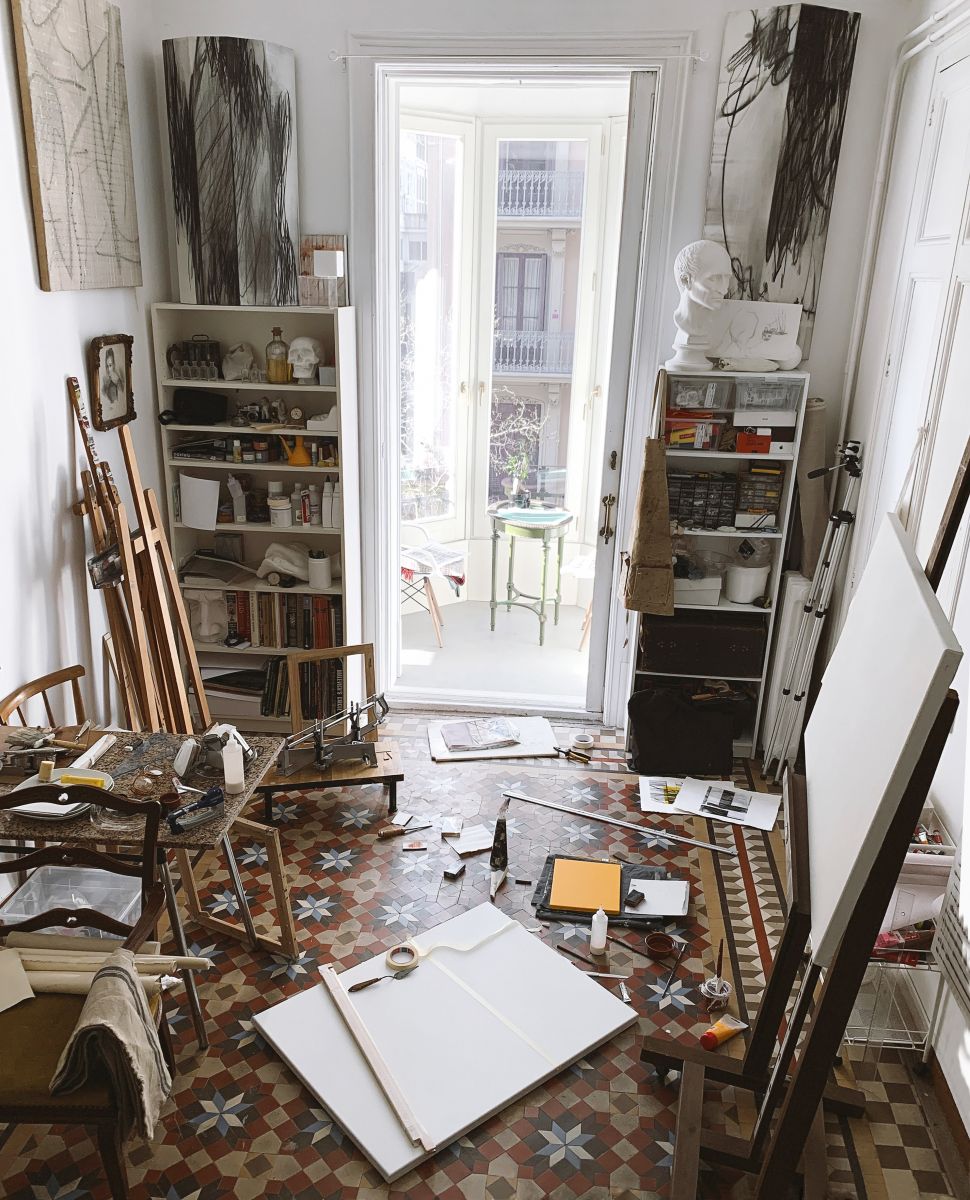 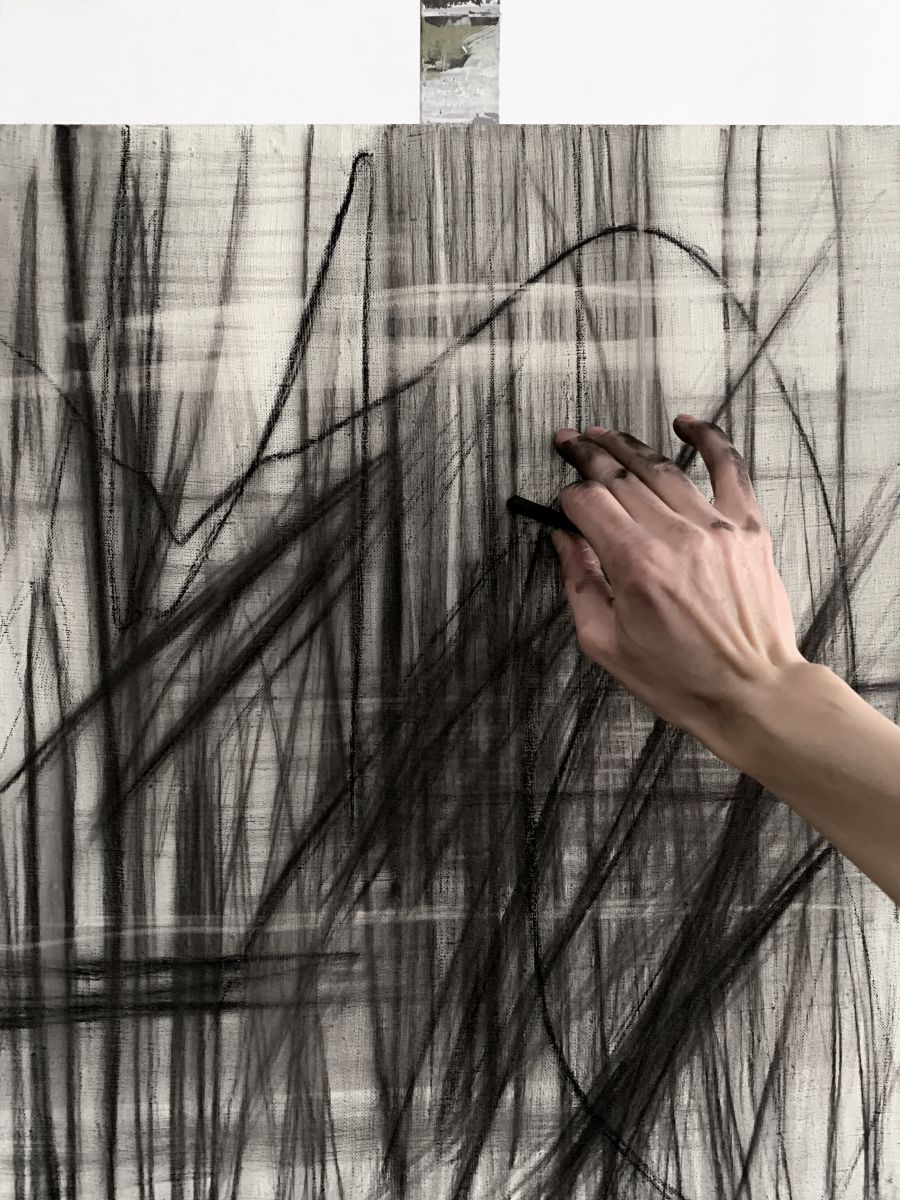